After some disappointments in recent years due to washout weather and poor patronage, the Phil Tresidder Memorial Golf Day finally got under way this season. And what a spectacular event it was!  Changing from mid-week to a 10 February Sunday afternoon was a bit of a trial more than a risk but it couldn’t have worked out better.

Amid the suggestions for change was a switch of courses with the newly-laid out Strathfield Golf Course complemented by its ultra-modern club house and facilities proving to be an outstanding venue. And to add to the occasion the weather was as perfect as a golf day could be with a cloudless sky comforted by a southerly breeze giving lie to the fact we were in mid-summer. Not an easy par 70 course but its resort-type styling eased the challenge.

The winners were no strangers to the victory dais with three members of the team of four, Peter Harrison, Matty Hilder and Dean White winning in 2015 while Peter was also in the successful team of 2008-09. Fast bowler Luke Radford was the new member of their group and playing in the event for the first time. His name will be a new addition to the impressive list already engraved on the cup. With a group handicap of 8.41 they shot a 6 under par round of 64 to give them a net 55.59 winning score. Second place went to the team of Ashley Burton, Paul Burton, Scott Stirling and Liam Clarke who were better than the winners off the stick to hit 7 under, but after their handicap of 7.09 their net 55.91 just failed to knock over the champs. And not far behind was the James Tyson, Paul O’Loughlin, Karl Schubert and John McLoughlin group who came in 5 under with a net 56.79 after their handicap of 8.21

The great Phil Tresidder’s nephew Mike Tresidder who has been a wonderful supporter of this event since it began shortly after Phil’s passing in 2003 brought two teams along. One of them didn’t go home empty-handed with the ladies group of Tracy Tresidder, Carolina Wigham, Helen Oliver and Louise Schweikert taking out the “Bradman Shield”, a trophy President Mike Whitney has had a mortgage on over the years. Mike wasn’t a contestant this season due to a family commitment. Closest to the Pin prizes went to Tracy Tresidder, Jeremy Scott and David Mitchell while the Long Drive was taken out by Scott Stirling.

Profits from this event over the years have been channelled into a fund known as the Phil Tresidder Memorial Scholarship which provides financial assistance to promising young Randwick Petersham cricketers who are keen to further develop their talents through a season with an English club. The day resulted in a profit of $1,185 thanks to a well-supported raffle and an auction item of four tickets to the South’s Chairman’s Lounge at ANZ Stadium for a South’s NRL match this coming season generously donated by Dane Thatcher of Green Options, who prepares our cricket grounds.

We are also grateful for the continued support of Brett Hunter, David Kelly and Michael and Tracy Tresidder who again dug deep in donating prizes for the raffle. Simon Patterson from Surf Life Saving Sunscreen was another generous contributor while the “Single Batch” whiskey donated by Teeling Irish Whiskey from Dublin was a popular prize with the winners. We are indeed fortunate to have such extremely generous supporters. Many thanks one and all.

We are also indebted to club Assistant CEO David Bourke who did most of the organising greatly assisted by the inimitable Chris Sullivan. Steve Smith also did a great job as auctioneer. Without their efforts the event and its success, would not have been possible.

Matt Hilder with a real winner 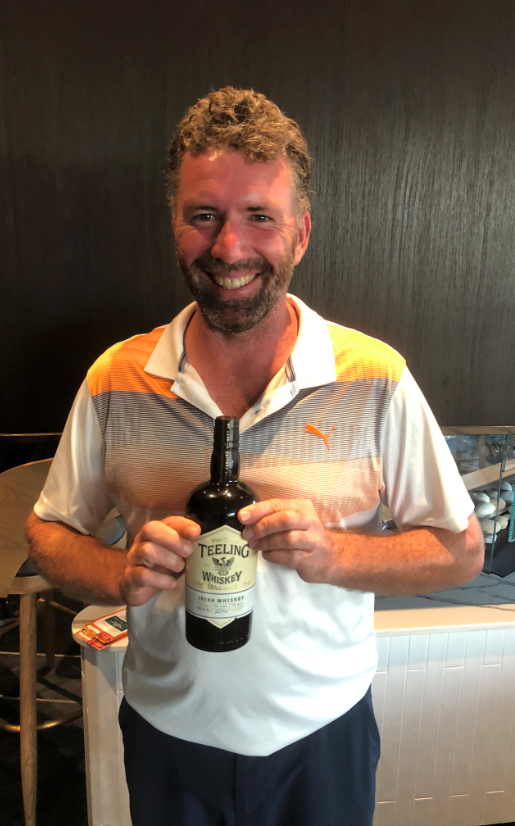