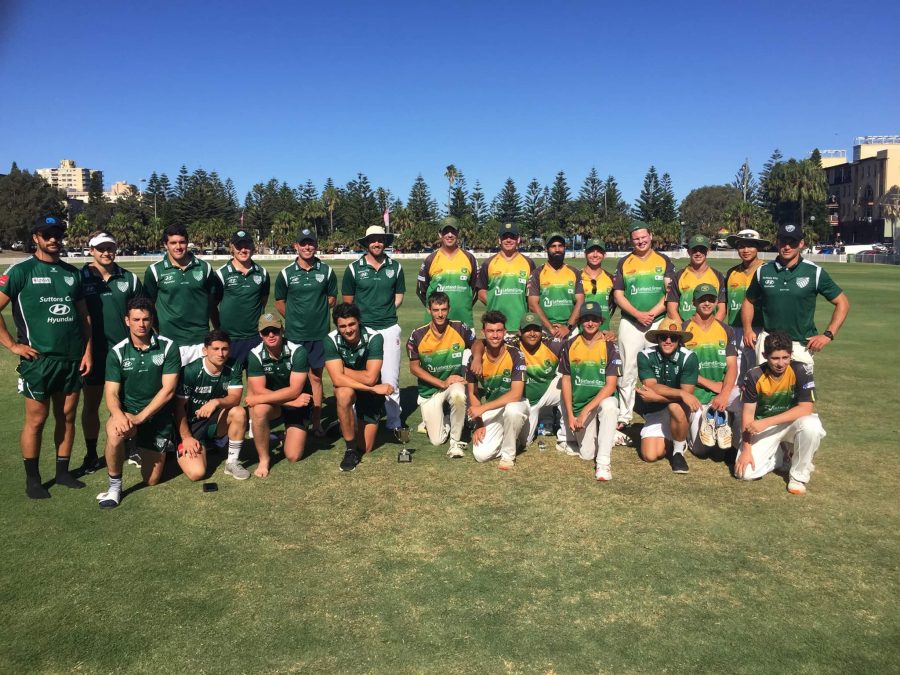 Coogee Oval, the shared home of both Randwick Petersham Cricket Club and Randwick Rugby Club, played host to the third annual Whitney-Poidevin Trophy on Sunday 17th February. As usual, the schedule for the day included a gentle warm up of touch rugby before the main event, a T20 cricket match for the prize.

After suffering a comprehensive mauling at the hands of some champagne rugby played by the Galloping Greens, the Randy Petes set out to regain the trophy in their strong suit. An agreement at the toss saw the cricketers take first use of an immaculate deck, and AWGS representatives Will Hutchison and Reid McNamara stride out to open the account for the Green and Gold, although some early pressure from the surprisingly brisk opening attack had the Randy Petes on the back foot early on. “Hutch” then began to unleash, capitalising on the potential he has shown in NSW Premier Cricket this season. He hit the first of many maximums of the day, on his way to a rapid 51* before retiring, although he was reprieved twice in succession by players perhaps used to catching a less spherical ball.

Once the “Powerplay” came to an end, runs became a little harder to find. The introduction of spin saw two wickets fall in an over, the second of which brought First Grader Matt Calder to the crease.

The Galloping Greens generously shared around bowling duties, in all using all 13 bowlers for at least one over. With the gaps in the field being plugged by a seemingly endless number of fielders, the only option left it seemed was to go over them. Matt delivered, striking 28 in one over including three sixes, before he too retired on 53*.

Metro Cup favourite E-Young “Pingu” Khoo made full use of the first ball grace rule in play for the day, playing a ramp over the keeper before falling second ball. This brought Josh Segal to the wicket, who looked in fantastic touch, delivering on his potential for 30* at the end with import Phil Patterson, guiding the score to 8/215 from the allotted overs.

A tight first over from CEO John Stewart’s offies saw the Galloping Greens immediately fall behind an imposing run chase, and the first ball of Mitch O’Loughlin’s first over made their task even harder when he “turned” one past the bat into off stump. Some creatively generous umpiring decisions denied Jeremy Jastrzab a couple of victims behind the stumps, although this perhaps played into the hands of the Randy Petes just a little, as it meant that some of the rugby big guns had to wait in the sheds a little longer.

It may be lucky that this was the case, as the bombardment that followed saw the required run rate being held in check. The famously short straight boundaries were peppered, with the middle order bringing up a pair of well deserved half centuries. With 6 overs to go, just 65 runs were required as 7 wickets remained in hand. However, with a couple of tricks up his sleeve, the captain turned to pace for the first time in the innings. A brilliantly disguised slower ball from Hutch (1/3 from 1) got the breakthrough wicket of Donaldson (52) as the run chase began to stall and then falter, exacerbated by the retirement of former Randy Pete Tyzac Jordan (55*).

All this set up a fantastic finale – 11 from the penultimate over meant that Pingu had to defend 25 from his last 6 deliveries. While the odds looked firmly in favour of the Randy Petes regaining the trophy, a towering maximum from the first ball made things interesting. A miscue from the second ball gained a couple, but an almighty swing and miss left Nick Kellaway’s stumps disturbed and a mountain to climb for the new man. Needing three sixes for glory, he failed on all three counts as Pingu held his nerve to clinch the victory and regain the Whitney-Poidevin Trophy.

All of us at Randwick Petersham Cricket Club would like to extend our thanks to Randwick Rugby Club  for a fantastic social day, and we look forward to continuing this tradition in the future. It’s a refreshing break from the often cut throat nature of Grade cricket to play in such a good-spirited friendly game against such agreeable opposition and we hope that you enjoyed yourselves as much as we did, despite the result! We also wish the Galloping Greens Best Wishes for the 2019 season and plenty of silverware too!!