What a great thrill for Randwick Petersham Cricket members and supporters as well as cricket lovers generally to awake this Queen’s Birthday morning to the news that Michael Whitney has been appointed a Member of the Order of Australia (AM). The honour was granted “for significant service to cricket and to the broadcast media”. And while there are many well-entitled recipients of such an honour today, there is no-one more deserving than Mike Whitney.

Michael Whitney is an outstanding individual. Not just because of his sporting success but in the way he has turned around his life from a young man who lost his father early in life to a person who commands respect wherever he goes. In his younger days when he was struggling with a direction in life, senior members of the Randwick Cricket Club indoctrinated him with the principles of trust, respect and humility. He has lived by those principles ever since.

Mike first played for Randwick Cricket Club in the 1976-77 season as a raw 17 year old left-arm fast bowler. In 1977-78 he spearheaded the 4th Grade team to its first premiership in 20 years. Promoted to 2nd Grade the next summer he did the same thing and followed up with a hat-trick of premierships the following season in his 1979-80 1st Grade debut season. 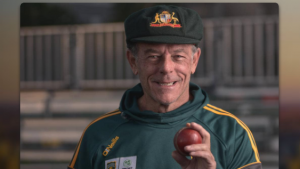 In 1980-81 he made the first of his 77 Sheffield Shield appearances for the NSW Blues. In the winter of 1981 he was called from his club in the Northern UK League to join the Australian Ashes Squad when a number of the fast bowlers were injured. Within two days he was wearing the baggy green of Australia in the Fifth Ashes Test against England at Old Trafford. He played at irregular intervals for Australia over the following 11 years with his two best first class bowling performances achieved in Test matches: 7-89 against the West Indies in Adelaide in 1988-89 and 7-27 as part of match figures of 11 for 95 against India in Perth in 1991-92.

In 1992 the NSW Cricket Board granted Mike a Testimonial Year “to recognise the magnificent contribution to Australian and New South Wales cricket by Michael Whitney, both on and off the field“. The highlight of the year was a Testimonial Dinner at the AJC Centre Randwick attended by more than 960 persons including all members of the Australian and West Indies teams who were playing a Test Match at the SCG. Such was the popularity of Mike the function was the largest ever held at the venue.

In his 13 year first-class career, Mike played 118 games and took 412 wickets including 39 in Tests and 251 in Sheffield Shield. For Randwick he took 379 wickets in all grades over 17 seasons including 256 in 1st Grade. In 1991 he was elected to the Randwick Management Committee and two years later made a Life Member. He was also made a Life Member of the NSW Cricket Association in 2002.

Apart from possessing an enviable reputation among Sydney cricket club administrators, Mike Whitney is one of the most highly respected ex-first-class cricketers remaining in service to the game. That point was highlighted in 2012 when he was installed by his NSW first-class cricket peers as the first Chairman of the newly-formed The Baggy Blues, a support group set up to assist former NSW Blues players in need.

What should also not be overlooked is Mike’s involvement in saving the historic rugby league club South Sydney Rabbitohs from oblivion. He was deputy chairman of the Rabbitohs and was at the forefront in the fight against the National Rugby League between 1999 -2001. After many public rallies and three court cases the club was re-admitted to the competition in 2002. And while the strain of it all took its toll forcing Mike to stand down mid-way through the battle, his contribution was a major factor in achieving an outcome which for most of its time appeared unlikely to succeed.

Michael is the perfect role model. Not just for young cricketers, but for the youth of the community. A father of triplets now in their 20s, he speaks their language and can relate to them much easier than others in more formal positions. His message when addressing the young cricketers in the club and with neighbouring associations is to play to win. Play hard but fair and always remember-it is a game. Enjoy it.

Mike has come a long way in his professional life. From a trainee aircraft mechanic to one of the longest serving hosts in the most competitive industry-television. It speaks a great deal for his loyalty, sincerity and dedication. Those attributes were tested in his early days as a promising cricketer with many lucrative offers to leave the Randwick club coming his way. But his loyalty to a club which had helped him in troubled times ensured those offers were rejected. With Mike Whitney, loyalty does not have a price.

Michael is a very community conscious person who is generous with his time. For many years he was involved with the Christopher Robin Committee for the Children’s Hospital at Randwick and over the past few years has been the “face” of the Taste of Coogee Wine and Food Festival held over a September weekend at Coogee Oval with the proceeds being directed to the Coogee Lions Club.