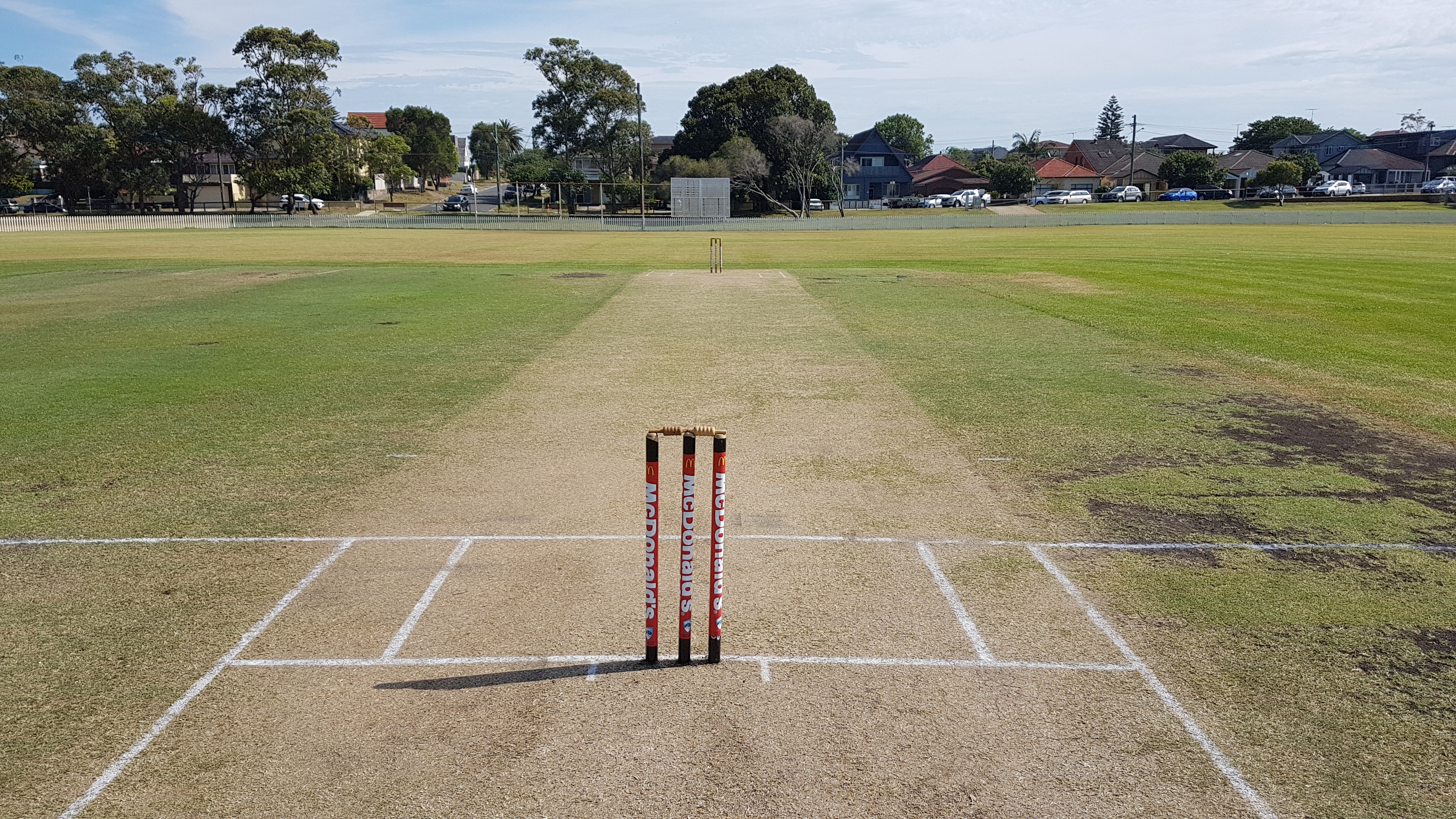 There were contributions throughout the entire Stags batting lineup, and we will have to display similar composure on day two at Coogee. Shaun Eaton (8*) and Will Affleck (8*) have been in good form to start the 2019/20 campaign, and if they can get the Randy Petes off to a flying start on Saturday we should go a long way to winning the clash.

The boys will back up for a T20 double-header on Sunday at Coogee, and we urge everyone to get down and show their support.

2s only saw one change this week with Doug Loth coming in for Jamie Hemphrey after moving up to 1s. On arrival to the ground, we were greeted by a rather brown and bumpy outfield with a wicket to match. We knew that the pitch would get progressively worse throughout the course of the match and thus decided to have a bat after winning the toss. Matt Everett and Adam Docos strode out to the middle with swagger and confidence. We lost Docos early to a ball that perhaps should have landed in the stands and not the hands of Mid-On. Tim Affleck and Everett started to play with some freedom before the latter chipped one back to the bowler for 19.

After losing a couple early Tim and Dylan Hunter started to rebuild, before unfortunately losing Tim to a sharp catch at short cover for 25. At 3 for 54 we knew we needed to knuckle down and build a strong partnership and that’s exactly what Hunter and Stephen Doheny did, with both passing 50 on what was becoming a very difficult pitch to bat on. We lost Doheny for an impressive 64 and as a team decided we need to put the foot down to build a strong total. With some powerful hitting from the middle and lower order, we began to push towards the 300 mark. We unfortunately lost Hunter for a very impressive 86 on a tough pitch. Some powerful hitting from Jacob Wood saw us climb above the 300 mark before being bowled out for 308.

We were left 7 overs to bowl at the opposition and within 3 overs the pitch had already destroyed the ball. At the end of the day’s play, Gordon are 0-11 after 7. Going into next week the spinners know they will have a massive role to play if we are to take 10 wickets on what is a very slow and lifeless pitch.

Third Grade hosted Gordon at Kensington as they look for their first win of the 2019/20 season. Captain Stares won the toss and elected to bat as the side looked to improve on the back of a poor batting display last round 2. However, a steady loss of wickets throughout the innings prevented any big partnerships forming as they the Randy Petes were eventually bowled out for 194 with Gordon 1/66 in reply.

After losing two early wickets, Ben Montedoro (15) and Jackson Eldridge steadied the ship until the former was caught just prior the first drinks break. In his debut for third grade, Green Shield player Josh Segal showed promise in a pressure situation until he was run out for a well-made 30. At tea, Randwick were 6/130 with Ryan Miskella and Eldridge both unbeaten at the crease and looking to take us to a score into the 200s. Eldridge came out flying after the break as the two put on a 50-run partnership until Eldridge fell for 92. The last 3 wickets fell quickly with Miskella the second last man out for 24.

With 13 overs to bowl, the Randy Petes were looking to claim a few wickets and the momentum into day 2 next week. Instead Gordon took the ascendency and reached 66 for the loss of only one wickets and a deficit under 130 which will mean the Randy Petes require early wickets for a shot at claiming the 6 points.

It was always going to be tough work in the field for 4s at Killara Oval with a good batting deck and a short boundary on one side, and the Stags showed exactly how to utilise the conditions as they strolled to a score of 8/289 at the close of play. Mitch Winslade (4/78 off 15) was promising in his 4s debut, but a dismal effort in the field and lack of consistency with the ball has the Randy Petes in a tough position heading into day two.

Gordon’s opener showed us exactly what will be required on Saturday, scoring a patient century off about a thousand balls. With some quality batsmen with higher grade experience in the line-up, it is not without reach if conditions remain the same – and a win would give us the second win of the season in 4s.

With an inexperienced side having 3 players debuting in grade cricket (and one debutant returning after a lengthy hiatus) and spin heavy bowling attack, 5s made the decision to bowl first on a greenish snape wicket. Joel Wilson and Will deller opened the bowling and made good use off the conditions early with joel finding himself extremely unlucky not to pick up a couple of edges. Deller on the other hand, following in the footsteps of his older brother, took his first grade wicket with his second ball. The Gordon batsman there on stayed patient putting away the bad balls on a lightning fast snape outfield and rotating the strike. The spinners all had some mixed returns before tea as Gordon’s number 2 and 3 formed a frustrating partnership. its fair to say after the first drinks break the guys dropped their heads.

Fielding was the biggest factor that let the team down. 4s were being let through the legs and easy 1s were being converted to 2s and 3s. Alan Willmore, a Randwick Cricket Club legend, was brought into the attack to tighten up and build pressure. Proving a wise decision Wilmore bowled tight lines and ended up taking the wicket of the number 2 Gordon batsman, who scored 81. PK was brought back into the attack against the wind as Ryan Connolly and Haider Ali were rotated from the other end. A big push after tea saw PK tie down one end as both leg spinners continued to tempt the batsmen with flight and turn from the other end. However, 4 dropped catches saw the day become even longer as Gordon’s set batsman used the opportunity to pile on a mammoth total.

PK finished the day with 3 wickets, Haider Ali took two wickets and Wilmore, Deller and Connolly all finished with 1 each. Although had those catches been taken, its fair to say we would’ve been batting. There’s a big finish expected from the guys to take the last two wickets (if Gordon doesn’t declare over night) and bat for long periods of time and build partnerships. Thanks again to the Antaws and the other parents who helped organise drinks and tea.

Metro Green made a return to Beauchamp to face the Stags. All were on deck keen to make amends with bat and ball. A 3rd toss was won and Stewart had no hesitation to bat on a greenish wicket in the sun. Osborne and Xu got off to a strong start with 21 before the former feathered behind. Xu and Stewart toiled against pace and spin to put on 51 for the 2nd wicket before a leading edged skier ended Xuey’s innings. The talkative Danny Saeed (12) pushed the running before falling on the last ball before tea with the board reading 3-99. It was a pleasing start in tough conditions and a platform was set for the afternoon session.

After tea Stewart (45) started to hit out down the ground before miscuing to mid off. Gill (16) got himself in before hitting out including a well struck 6 over mid wicket while Lee (27), in his return to batting after an off season broken finger, showed no signs of rust with his trademark lusty blows. The tail wagged into the 65th over with Keith the last to fall.

With 12 overs left in the day Chaz was the pick of the bowlers with Lee finding a faint edge which was turned down by the umpire. Green are looking forward to return on Saturday with the Stags 0-37 and the game in the balance.

In contrast to last week’s mud patty, Marrickville rolled out a hard, fresh deck for our first home two-dayer of the season. While a bit green from afar, closer examination showed that to be a misnomer, with the deck being dried than usual. After losing the toss and being asked to bat, the new opening pair of Marley Besgrove and Ahsan Shahid started solidly, but it soon became apparently that the pitch was going to be slow one, as numerous balls to the keeper started dying well in front of him. Scoring was slow and difficult, but Luke Takacs (23) in his first game for the club looked at ease – taking the time to get himself in and then unleashing some powerful shots. At 5/78 at tea, the lower order weren’t able to continue on the hard work from the first session, as the Golds succumbed to all out for an even 100.

Ben Thomas (2/17) and Adam Coombs (1/22) came out bowling fire and thunder, but their pace initially played into the Blacktown openers’ hands as they edged their way to 34 without loss. In a moment of admirable sportsmanship, the young Blacktown opener walked after edging behind and being given not out by the umpire. This was the catalyst needed for the nascent Golds, as balls all of a sudden looked unplayable and the spinners had their deliveries burrowing underground. Resolute in their defense and doggedly determined to survive until next week, two more wickets were snagged before the close of play by our tear-away quicks, leaving the game delicately poised for next week – not only in the first but also the second innings.