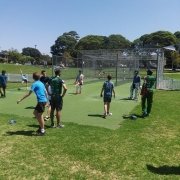 In 2019-20 Randwick Petersham continued their commitment to developing the ‘Next Generation’ of local cricketers in the Eastern Suburbs and Inner West. The summer Masterclasses were made possible due to the great support from our Community Cricket Partner Sydney Airport and AW Green Shield sponsor Brown Wright Stein Lawyers.

Director of Cricket Operations Bill Anderson and Head Coach Greg Small liaised with our friends at Randwick JCC and Marrickville CC to put in place the Randwick Petersham Masterclasses. The first was held in December 2019 at Snape Park and another in January 2020 at Marrickville Oval and Tempe Reserve.

At Marrickville Oval and Tempe Reserve 25 talented youngsters from the Inner West showed great commitment and skill, improving all aspects of their game. Again appreciation is extended to Daniel Bell-Drummond for leading this clinic alongside Ireland A batsman Stephen Doheny and First Grade all-rounder Dylan Hunter who honed these young player’s skills in batting, bowling and fielding which was put into practice on the final day in a very competitive match played in the right spirit.

Randwick Petersham wish Randwick JCC and Marrickville CC players and supporters all the best for the remainder of 2019-20.

The Sydney Sixers in conjunction with Randwick Petersham Cricket Club are pleased to announce a Community Coaching Clinic at Coogee Oval ahead of the 2015 summer of Cricket!