World War I Roll of Honour

Three of the founding clubs of Randwick Petersham Cricket, namely Petersham, Randwick and Marrickville were represented in World War I by a collective total of 89 members who served with pride, honour and dedication. Most of them returned safely, some wounded, some scarred. Some were the bravest of the brave and received the appropriate honours and awards.  Sadly, some paid the supreme sacrifice.

One hundred years on, in a year commemorating Anzac Day, we are grateful for their contribution and thankful that in their memory we can enjoy the great game of cricket as part of a freedom they fought so hard to protect and preserve.  Their names will remain in the annals of this club as heroes irrespective of the extent of their involvement and participation in the world’s deadliest conflict. A Roll of Honour for each club follows. First or full names have been included where known. Petersham District Cricket Club had the honour of having 54 of its members and former members serve in World War I. Unfortunately, four of them made the ultimate sacrifice being killed on active service while three others died of wounds and another through sickness.

The ravages of war were never more evident than the emotional turmoil and heartbreak experienced by William Seabrook who played with Petersham in 2nd and 3rd Grade in 1914-15. His three sons George (aged 25), Theo (24) and William Keith (21) (all pictured) were killed on 20 September 1917 fighting together with the 17th Battalion in a fierce battle against the Germans at Ypres, Belgium. Theo Seabrook played with his father in 3rd Grade in 1914-15 scoring 140 runs with 30 his best.

Cecil Cleary (aged 24) a 3rd Grade player between 1911 and 1914 was also killed on 20 September 1917 at Polygon Wood, Belgium, part of the Third Battle of Ypres. He was wounded three times before losing his life. His brother played with the Petersham 2nd Grade team.

Edward Harold Fitzgerald, who scored 106 not out in the Petersham IV team in 1913-14 after playing in 2nd and 3rd Grade died in France of wounds received in battle as did prisoner of war Harold Albon Barry, a 28 years old tailor who set a 3rd Grade record in 1911-12 with a score of 235.  Mr F Wilson, a 3rd grader in 1914-15 died of wounds received while J Smith, who played in the Petersham 1st Grade team of 1915-16 after topping the 2nd Grade averages, died of illness while on active service.

Johnny Morris Taylor was a 21 year old who played with Petersham in 1915-16 scoring a record 1st Grade aggregate of 857 for the season. He served as an artillery gunner in WW1 and when he returned he played with Gordon before going on to play 20 Tests for Australia between 1920 and 1926. 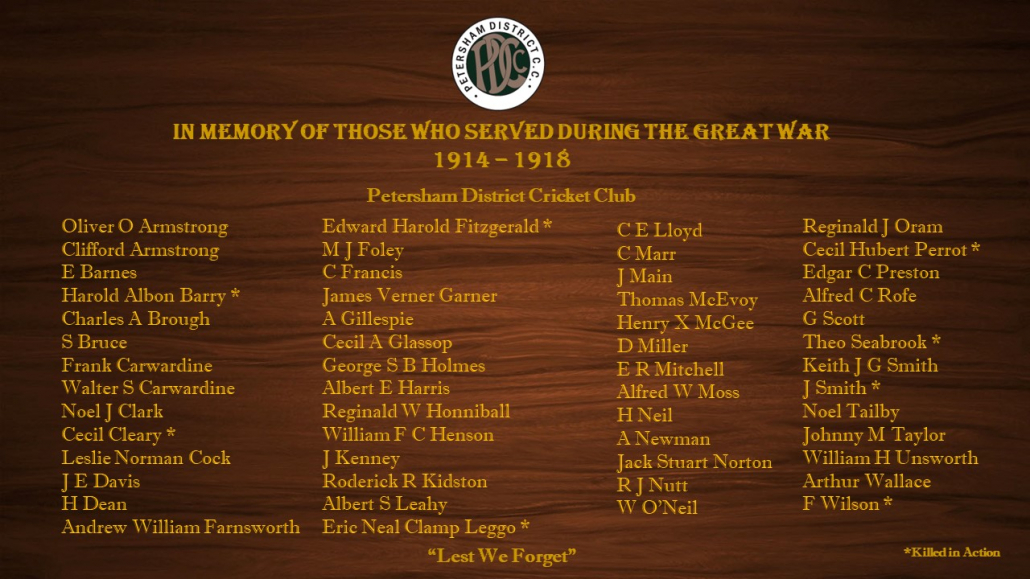 Randwick District Cricket Club was honoured with 24 of its members and former members serving in World War I. Fortunately, none were killed although four of them were wounded while on active service.

Walter Ambrose Dowd (30) who was a Randwick Hon. Secretary and the club’s most successful leg-spin bowler was one of the wounded. However, he received a Distinguished Conduct Medal (second in prestige to the Victoria Cross) in 1918 for “brilliant leadership and disregard of personal danger” while leading his platoon in an attack on the enemy in a French village which resulted in 14 prisoners of war being taken along with four machine guns.

Another wounded serviceman was Oliver Ambrose “Os” Taylor (23), a senior batsman in the club’s First Eleven playing in the 2nd Grade competition and a Hon. Secretary. He was forced to stand down from his secretarial role when he enlisted in April 1916. He was wounded at Bullecourt, France in May 1917 and medically discharged in March 1918. He became one of the club’s “greats.”

Geoffrey Souter Loney was 21 when he went on active service in 1915. A clerk who was born in Campbelltown before the family moved to Blenheim St., Randwick, he was wounded in battle and was awarded the Military Medal (one step down from a DCM) in 1919 when he was 25. Under machine gun fire, Sergeant Loney took command of his platoon when his senior officer was wounded. Leading his men on a charge he captured two guns and prisoners. He was considered as having “displayed great coolness and judgement.” He went on to represent Tasmania in a first-class cricket match in 1922.

Two players who were brothers and doctors also served in the war. Dr. Cecil Allen graduated in 1915 as a Master of Surgery and his brother Dr. Theo Allen did the same thing the following year. Both  Walter Dowd returned to Randwick after the war.

L Maloney was wounded while on active service. He played just four games with the club in 1914-15 scoring 41 runs while he took 4 for 46 with his bowling.

A player who participated in the war but didn’t join Randwick until 1919, a year after its conclusion, was Colin Graham Lutton. He was awarded the Military Medal in 1918 for “displaying courage and initiative” in attacking enemy soldiers “firing his gun from the hip while wounded, to assist his platoon in gaining the objective.” Lutton went on to play 13 seasons with Randwick as one of its best lower-grade all-rounders. While it is known that a number of Marrickville’s playing members served in World War I, only 11 can be identified. The club did not produce a Roll of Honour which may have been an outcome of it not being operational for three seasons between 1916 and 1919. Financial difficulties were also being experienced well before it shut down with the annual report of 1914-15 reduced to a few typed foolscap pages a clear example. No report was produced to cover the 1915-16 season. The annual report of NSW Cricket Association for 1918-19 however, included the names of those who the Association was aware, served in the forces from the Marrickville District Cricket Club.

Gordon Roy Asprey (pictured), one of the best spin bowlers in the club returned in 1918 a war hero and highly decorated soldier being awarded a Distinguished Conduct Medal (DCM). His recommendation papers included the comment “during nearly four years of active service, including a considerable period daily under fire, (he) carried out his duties most fearlessly and capably.” The papers also state “his intense energy and efficiency as the senior NCO contributed in a marked degree to the success of the unit in coping with the tasks allotted.” He served at Gallipoli arriving there in June 1915. He was also awarded the 1914-15 Star, British War Medal and Victory Medal.

Milton Jarvie, a 3rd Grade and City and Suburban player who took a hat-trick in 1911-12, rose to the rank of Major and was also honoured with the Military Cross and the Efficiency Decoration. He subsequently became mayor of Marrickville Council from 1925 to 1927. He was also elected to the NSW Legislative Assembly in 1925 as the Member for Ashfield serving until 1935.

Clifford James Searle was a 22 years old warehouseman when he left for the war in 1915 being awarded a Military Medal for his service in the 5th Australian Field Ambulance unit. The recommendation papers state:  “At 3.00 p.m. on 3 May 1917 the shelling was so severe that the Ambulance Wagon Loading Post had to be moved. These men (Searle and A T Watters) speedily removed 10 patients under very heavy shell fire. They continued at work for 36 hours without rest and loaded 400 to 500 patients on to wagons, all the time under more or less heavy shell fire.” Prior to enlisting he was a regular member of the club’s 2nd Grade team. 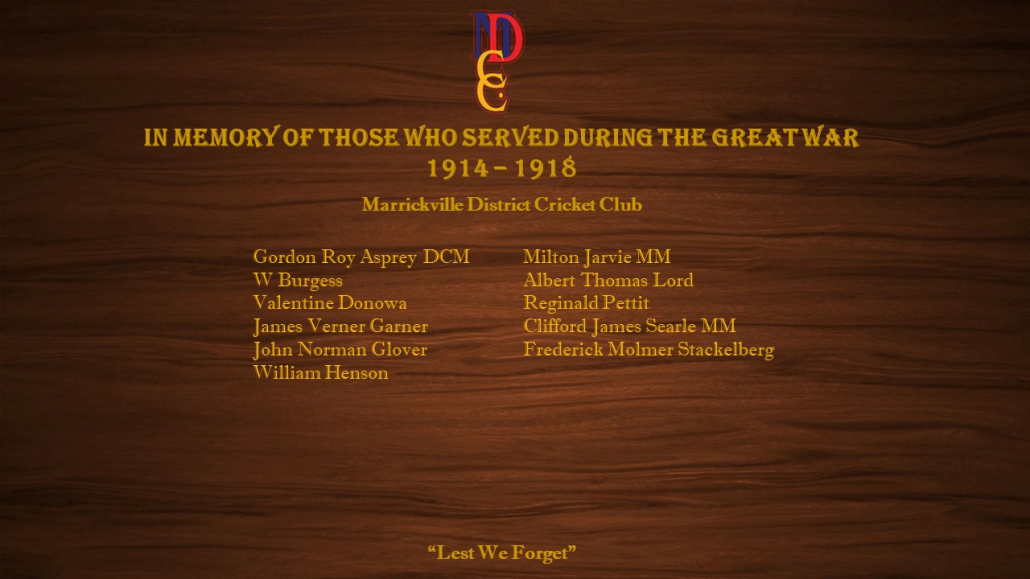 Over a million Australians, both men and women served in World War II with more than 500,000 engaged overseas. Almost 40,000 Australians lost their lives while close to 70,000 were wounded. Cricketers were not immune from the conflict with 10 first-class Australian players among those killed. Eleven such cricketers had been killed in the First World War. Sadly, nine members of the 139 from our founding clubs who served in World War II, were killed or died on active service.

Extensive research has gone into the preparation of our Roll of Honour to commemorate the involvement of those members in World War II. And while the majority of those who participated have been identified there are some who unfortunately remain known only by an initial and a surname which is the way the three clubs listed their serving members. We would like to be able to identify those remaining members by their full name and thus be able to uncover their service history and any other relevant background information. It would therefore be greatly appreciated if anyone who has any details, information or even a family contact reference could email me at [email protected].  It would also be of interest to hear from anyone who could provide more details and background on any of the servicemen listed.

From the information so far uncovered on those who lost their life, were injured or who were honoured for their bravery, a number of short articles have been prepared. Note that some of these stories may test your emotions.

A Roll of Honour for each of Petersham, Randwick and Marrickville is listed below. 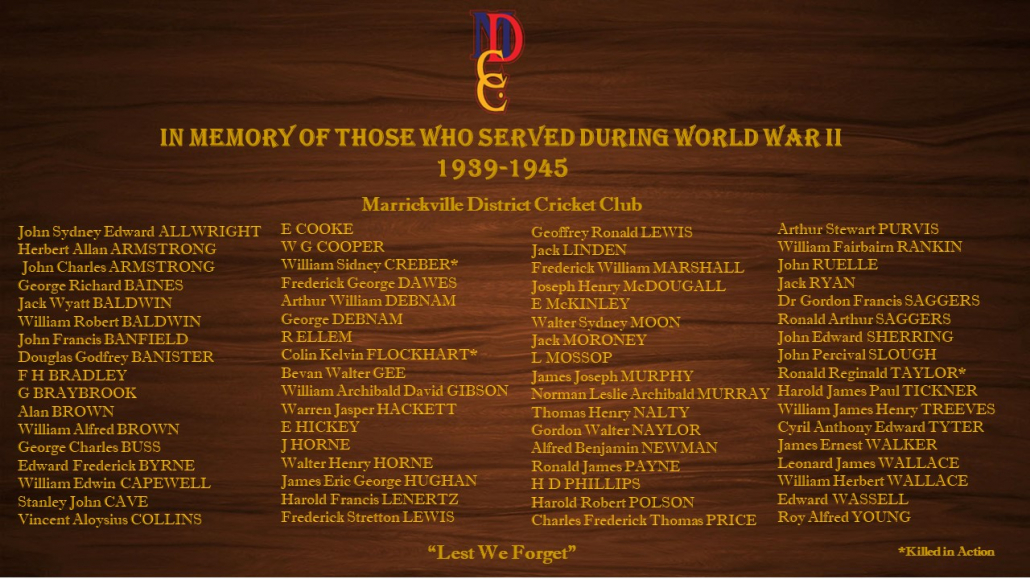 They shall not grow old, as we that are left grow old,

Age shall not weary them, nor the years condemn.

At the going down of the sun and in the morning.

We will remember them.